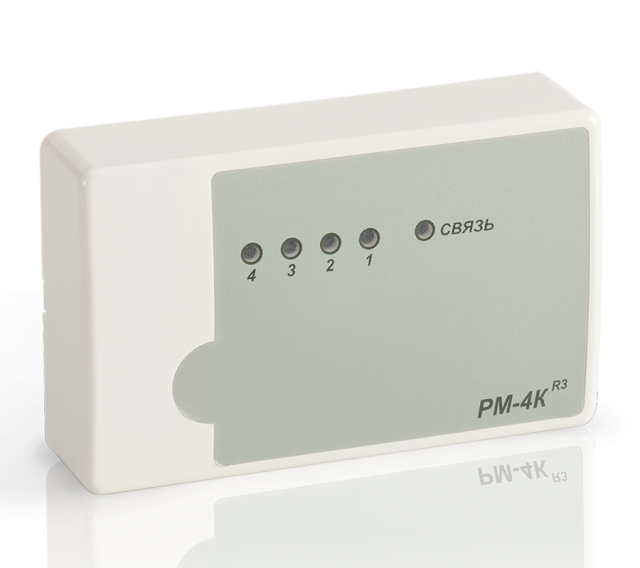 Addressable relay modules are programmable devices. It is configured by the user by means of SW "FireSec "Administrator".

Depending on output quantity (number of relays), relay module is produced in two versions:

The following equipment and units can be connected to the addressable relay module:

RM-K module controls the circuit from each relay to actuators for interruption and short circuit in switched-on and switched-off condition of the relay.

Relay module RM-K prot. R3 may be installed in DIN rail using special securing bar (not in the scope of supply; may be provided by separate order).

For interruption and short circuit control of the line LCD should be connected directly to the load of relay output (to the actuator) according to connection diagram to Output4 shown in the picture. If the integrity of the load circuit needs to be controlled, then connection is according to the scheme connected to Output3 on the diagram. Diodes can be used for circuit integrity control instead of LCD. Their connection is shown on connection diagram to Output2. Several devices, i.e. indication panels OPOP 1-8 or OPOP 1-8M may also be connected to the same output. In this case, the indication panels shall be connected to the line in parallel, and one diode for control current shall be mounted at the end of the line. Installation diagram is shown on a scheme in case of connection to Output1.

Within the system each relay of the addressable relay module RM-K prot. R3 is a stand-alone logical device, i.e. each relay is defined as a stand-alone fully-featured device and takes one address in the system. Thus, relay module RM-4K prot.R3 contains four separate logical units and occupies four addresses (one address for each output). When the module is configured the address is assigned to output No.1 only, all the other outputs (if any) are assigned addresses automatically in ascending order, starting from the preset address.