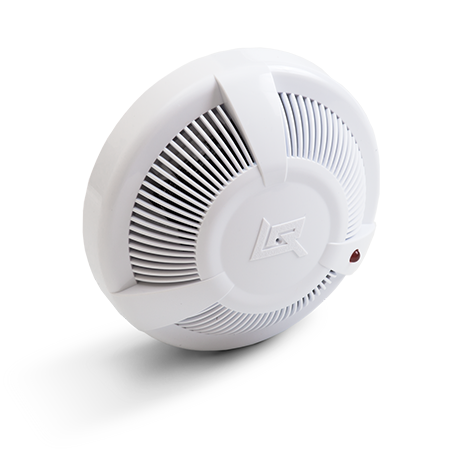 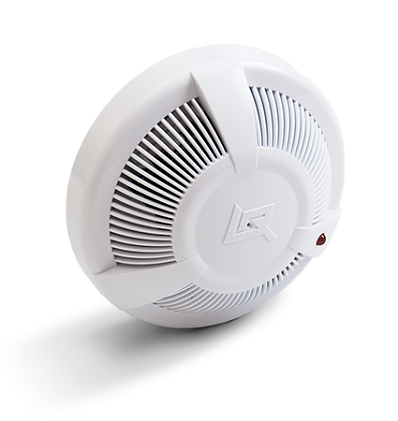 Electrooptical smoke detector IP 212-187 is designed for yearly detection of fire accompanied with low concentration smoke in enclosed rooms of various buildings and facilities. Detector power supply and "Fire" signal transmission is provided via double-wire alarm loop and is accompanied with optical indicator activation at detector tripping. The detector does not respond to temperature, humidity changes and to the presence of flame and natural or artificial light.
This electrooptical smoke detector, "Shater" series, with advanced characteristics and aesthetic appearance has the following features:

The detector is intended for round-the-clock and uninterrupted operation with control and indicating devices ensuring supply voltage in the alarm loop within the range of 9 to 27V, which accept "Fire" signal as steplike decrease of the detector internal resistance in normal polarity up to the value of 1000 Ohm, such as Granit, Grand Magistr, VERS PK, Signal-20, Signal-20P, etc.

"Fire" signal remains active when smoke exposure to the detector stops. Reset is performed using receiving and control device by detector power switching off at least 2 sec.
Connection of the detector and the socket is of plug-type. Circular contacts allow mounting of the detector without orientation with respect to the socket. Socket is unified, and any Rubezh detector may be installed without the need of reinstallation. Minus wire of AL is connected to short-circuited by the detector contacts 3 and 4. This provides "AL failure" signal sending to FACIE when the detector is disconnected.
The detector may be installed on suspended ceiling using special socket with mounting ring.
In case of detector connection to AL of receiving and control device with activated detectors quantity determination function (double-trip function), auxiliary resistor Raux shall be used. Auxiliary resistor rating depends on receiving and control device connected and shall be designed using device circuit loop resistance in "Fire" and "Warning" mode as an input data. Instead of auxiliary resistor, compatibilizer US-01 may be used. It shall be plugged into detector's socket and have resistor (rating to be determined at ordering) and terminal block.